Jay Farnsworth at the Red asked me to see her, so I did after my nose stopped bleeding, and long story short, I got a job! It's a very part time job, four hours a week, helping her computerize her bits and pieces and update the web site, I think, but I get to work at the best gallery in town, and get paid. (Yay to income!!!) Sue Bateup had asked me to start thinking about returning to her gallery, too, so I have to work on my own schedule.

Karen has left the Red's Morning Room cafe, now that's Rosemarie's turf. Today I tried the decaf, because I can't handle caffeine and hayfever simultaneously, but today was the first time in my life I had a decaf that tasted like coffee.

Then I went to Fibre Spectrum on Trafalgar St. It was my first reconnaissance to check out "my" wall, and am I glad I did it. This coop has been going though some transformation, and the exhibition space had been tidied up. Susanne Williamson, a shibori and dye artist, had a beautiful display, (the kind that made me email her first thing after I came home,) and the space was at least twice as large as I expected. I need at least five wider (30cm?) pieces and some narrower ones. I don't have to worry much about the narrow ones; I have five at Westport right now and I'm sure some of those will be coming home; perhaps as early as this week since Saturday was "selection" day, considering how my cottons fared in the last "selection".

I measured the space and took some photos. And I kept looking up and wondered if I could do something spectacular on the rafters. I am forever indebted to Andy Clover for planting such ideas in me. 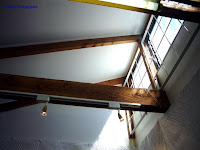 Then I went to the gym, then to the bookshop for next year's appointment books, and two magazines on gardening; I'm really keen to do some work in my garden, both flowers and veggies. Like weaving, I need to learn to work in short spurts in the garden, however, rather than blocking whole days.

Tomorrow at 9AM, I'll have two wisdom teeth extracted. I'm not thrilled, but I've waited something like eight weeks, so I am ready. I have no plans whatsoever for tomorrow afternoon or all day Wednesday, and I am looking forward to that. The only thing I'd like to do is to make baked beans; I've already soaked the Haricot beans, and there's a handsome bacon hock waiting for me in the fridge.
Posted by Meg at 10/06/2008 07:44:00 PM