The house saga continues. This morning I was ready to kill a few big blokes. I had to sort things out once and for all, so I didn't go to work and asked (told?) Ben to stay home, because some of these guys are big and I was more than a little terrified. The lesson of the day is a recurring theme for me: talk to the person who can remedy a situation, not to folk who are nice or easier to get along with, or the one who will never get it. I never seem to learn this, but today we came to an acceptable compromise. I hesitate to think it was because Ben was here, and I hope we're not going to be charged for their error.

Neighbor Neil came over and cut some branches; they were sticking out over the fence (not a big problem) and clotting his patio gutter (problem.) I started tidying the area a couple of months ago, and left the high bits for Ben and forgot all about it. It's pleasant talking to Neil about.... stuff. He's a proactive calmer-downer, a solution guy, whereas Ben's a contagious calmer-downer, which doesn't work on me sometimes.

Joinery guys came to measure the pantry; they're from an old, reputable company; the main guy had an Irish (?) accent, (guilty of noticing accents!), the younger guy looked like Tolkien's elf in dreads.

Still needing to get some morning yuckiness out of my system, I started scrubbing the kitchen cupboard doors. Which was silly considering not all the work in the kitchen is finished, but I had to physically get rid of yuckiness. If I'd washed the insides of the cupboards, it would have been far more productive, and I knew this then, but sometimes I find it very hard to be reasonable.

Lest you think I've nothing weaving-related, I posted a few weaving pics on my Facebook. (There I have two photo albums named "My Life as it Is" and "My Life as it Should Be" and the weaving pics are in the latter, of course.) All these years later, Lalla, who now lives in the Middle East, finally got to see my weaving today, and she approves. To me, it was like tracking down a kindy teacher or a nurse from the maternity ward where/when I was born! 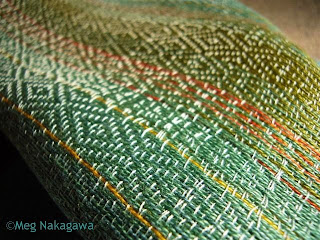