It's great to have peaceful people like Ben and Tim Wraight to help me. Things that looked pretty hidious yesterday didn't look so bad today. 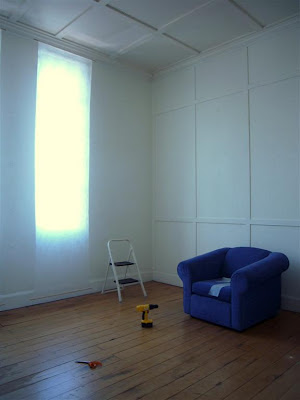 The chairs: although I found more cigarette burns and two huge brown stains on the pet-hair chair, this color probably suits the surrounds better than the navy blue sample I saw. I vacuumed the chairs twice, and used the lint-remover (a whole role for the two chairs) and ended up picking hair by hand, but they are OK now. Tomorrow I have to sew the tear.

By the way, the soft light is coming through a set of window shades Tim made out of garden shade cloth. It's light weight, inexpensive, but extremely effective. This was a huge job I wasn't sure of, and it took a better part of two hours, but Tim just quietly made and hung them. Thank you, Tim. 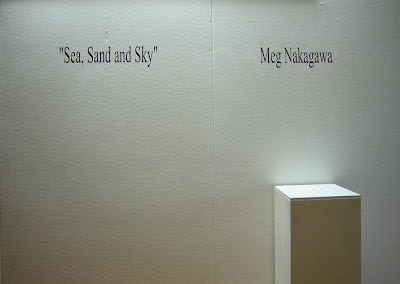 The cut lettering: we separated the three lines, set the Exhibit(ion) title; no problem. Then we tired to decide the position of my name. Well, even though they are the same size fonts, when we put the name below the title, it looked so much bigger, so Ben thought to put it to the right; below it we'll have my two A4 sheets of "About Me" and "In the Beginning" (in lieu of Artist's Statement and Resume/CV), and comment/doodle notebook on the plinth. 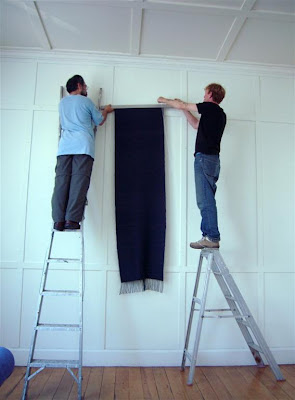 Going back to peaceful people, Tim is a successful sculptor and not the kind of man one normally calls to solicit help installing a tiny newbie show. And Ben's a good engineer and hobby cabinet maker and is perfectly capable of hanging shawls. But neither Ben nor I have experience in installing an art exhibit(ion); Tim has, in abundance.

I didn't grow up with a lot of visual art, nor people who exhibited work. So this whole "weaving thing" has been a journey in a foreign land, and yet I chose to travel alone, and enjoyed the solitude. When I started to plan This Hoo Hah, I paid attention, and got plenty of professional and friendly help, but I alone made the decisions.

An Exhibit(ion) involves other people, though; people who will climb up a flight of strange stairs in the Nelson summer heat to see wool shawls, and for that, the shawls need to be hung as attractively as possible, and people need to feel it was worth the climb. Without expert knowledge, Ben would have suggested a few things, but I would have bullied him into doing things my way; not a recipe for optimum results.

That's why Tim's presence was so important; he could explain how people behave, where eyes go naturally, what normal practices are. And he's taller than Ben, so the five pieces in hung in the first room - they are going to be almost 80cm higher than I had planned, and they look terrific, if I may say so myself.