I "met" Fay though Cross Country Weavers, a NZ-wide group of weavers who make small samples and exchange them once a year; at least she remembered my name, probably because I finally sent out my samples six months after the recommended due date, after my tendonitis. So when we were both in Randy's workshop in October, she introduced herself. Fay and Husband have been holidaying at Kaiteriteri Beach north of here, and dropped by yesterday afternoon, and we had great fun talking about weaving and Randy's workshop.

Here's one of the samples she sent me in the 05/06 exchange. You need to click and enlarge to appreciate the full effect of this fine sample. 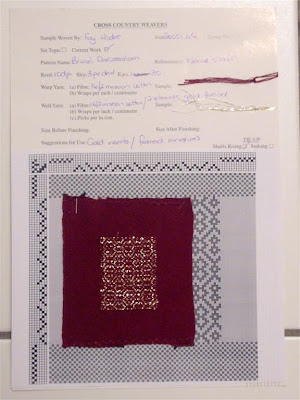 The sample was inspired by her daughter's visit to Brunei; it's a name draft using "Brunei Darussalam"; 30 EPI, 16/2 cotton in warp and weft with 2-strand gold threads for the pattern.