What Is An Accomplished Weaver?

Sue was kind enough to come over in the rain this morning to look over the shawls I've woven so far for the Exhibit(ion). One of the problems I had was the too-fine fringes on Shawl 4; she took one look at it and suggested I make them half as long. That way, the fringes don't look so scrawny. I'll post before and after pictures when I've made the changes, but that piece is going to look so much better.

I've been thinking what makes one an accomplished weaver. Technical competence is a must, as is knowledge of fibers, colors, and weave structures; some knowledge of dyeing, spinning and/or sewing/pattern-making are desirable. It's the weave structure that puzzles me.

When I started weaving, I had so much fun with plain weave, I wove just that for nearly five years, mixing yarn width, colors, and especially playing with spacing and cramming, without ever trying Log Cabin or Color-and-Weave (different placements of colors that can produce an optical illusion with plain weave.) Then I moved on to twill, and I have been happily weaving twills for, oh, going on six and a half years, and I'm just starting to get to know this weave structure. For the time being, I'm perfectly happy to weave just twills for a few more years, before reluctantly moving on to something else.

There's another element to this. Previously, weavers learned structures from mothers, masters, teachers or books, and then they might have drawn what we call weaving drafts by hand, on graph paper. This is like a blueprint for a piece of cloth, where on the Y-axis you enter the threading, and on the X-axis you enter the order and combination of shafts lifted for a particular pick. (There are two ways to show the latter, but we won't get into it now.) Then, you worked your way though either vertically or horizontally and colored in where all the warps (or all the wefts) were lifted in a particular pick so you can see the weave structure. 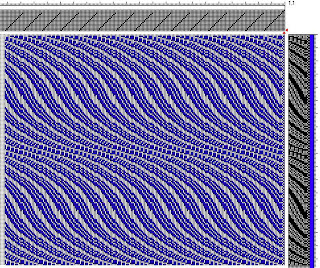 Sample Draft: Shawl 3
I did some of that with 4-shafts weaves, and then I got a drafting application; now I only need to enter the information on the X- and Y-axis, and computer will automatically fill in the interlacement. In other words, I started using a calculator, or a spread sheet, soon after learning addition and subtractions, but not quite multiplication or division.

I still read up on a particular weave when I have to learn one (this time last year I had to learn about Repp weave and create a draft of my own), but I can still sit down and do half the work and let the program figure out the fiddly bits.

Similarly, even though I am a novice, I have a big 16-shaft loom, which allows me to play with more intricate lifting combinations (i.e. weave patterns) even if I stuck to, say, twill, than a 4- or 8-shaft allows. So I don't have to move on to another weave structure to entertain myself.

So, Sue would ask me what weave structure I used in Shawl 3, for example, and I said there is a link to the draft on my blog, and I wasn't sure if we were still speaking the weaving language, especially now that we can exchange or download drafts. 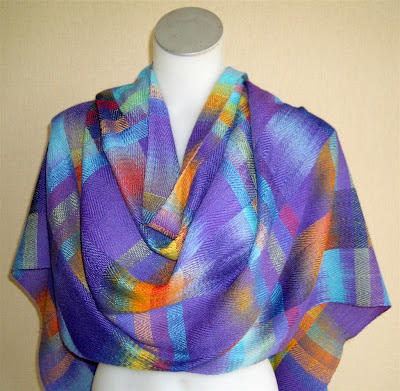