E for Elegant, F for Funky 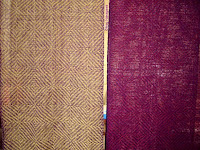 The first inning of the home game went well; a bunt and a two-run homer; the weft is from Mom's "discarded burgundy" bag. The second inning, though, I've tried a new player named "Funky"; it's a yellow green. I'm still not used to florescent lights, neither when I'm weaving, nor when I'm shooting; I still can't see well and the picks need improving, but I kept thinking of simultaneous contrast. Neither of these will have fringes. And on the loom now is a blacker, slightly thicker burgundy, intended for Pat.

Even before I started to weave seriously, back in the days I kept busy attending marketing courses for small businesses, I set my course at "elegant", "exquisite", "feminine", "sentimental". Just when I thought I got a glimpse of it with the Craft 08 cottons, I became hopelessly overcome with a desire to partake the Refinery's rebranding, and having some of my stuff at their retail section has been at the back of my mind.

I would like to weave scarves unlike what I have at the Red because of the different target markets, on my part as well as the galleries', and I've had this notion of "funky" for the Refinery: bolder designs, livelier color, a more arty, spunky feel, to match their clients and other works in their shop.

So while trying to work efficiently, I've been going back and forth in my head as to what would suit Santa Fe Weaving Gallery, (no idea there), the Red, and the Refinery, and this is contributing to my dissatisfaction and confusion. I am aware of this, but I can't compartmentalize and concentrate on Santa Fe, because I've never been there. But for example, the shouty screamy lemon might suit the Refinery, you see; if I do this well, nothing goes to waste, as in everything would suit one or the other of places.