There's nothing new about what I'm about to say; you may be so familiar with this you may not understand why I'm excited. And now that I've caught on, I remember seeing this in old Swedish books and possibly in Davison. I'm not claiming I invented this, unlike when I believed I invented two-faced twills in earnest in 2003, when I saw Maggie Smith wearing a black and white scarf on the train in "My House in Umbria". But if you haven't drafted this way in the last little while, it could bring a bit of variation into your cloth easily.

I know I sound spoiled when I say I have only 16 shafts, but sometimes I know I could weave a structure in my head if only I had one or two more. I've felt constrained by this from time to time, and have been looking for a way to bust my blues, even if it doesn't solve my "too few shafts" problem on hand.

Of course there is the more-complicated-threading option as well, but with my eyes and florescent lights and texolv, I'm opting giving myself permission to opt for the easier option for now.

The beauty of computer-controlled and tables looms is you can weave unconstrained by the number of treadles on your loom or dobby sticks/bars (??) on your chain. So, just because my software shows me 16 treadles to go with 16 shafts by default, there is no reason why I have to stick to 16, and in fact, I have downloaded from Handweaving.net and wove drafts where the numbers of treadles were far greater than that of the shafts.

So I started a drafts with 16 shafts and 32 treadles, and drew two rather different looking 16-by-16 tie-ups, and then drew treadling curves disregarding different sections of the tie-up. This gave me more "physical" room to move my mouse around and gave variations in my cloth without having to rethread, and a nice base for another draft. 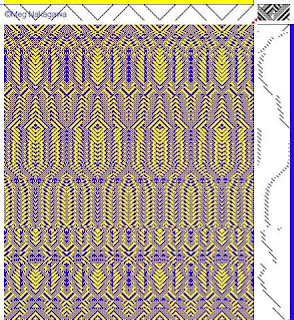 If you have a weaving software, this is dead easy, and there is no reason why you can't have even more treadles, and the treadle numbers don't have to be multiples of shaft numbers. And there is so much to do with the different tie-ups. Convert into a lift plan, and you can weave this, albeit a bit slower, on any table loom, or on a floor room if you don't mind chanting the tie up, OR, if you use, e.g. five treadles each in two sets on an eight-shaft loom. Even if you only want to try tie-up combinations for four-shafts, it's a convenient starting point. And if you are a patient or fast drafter, there is no reason you can't do this on graph paper.

So it was that I spent part of the day dreaming up some drafts for the cotton scarves, but sanity intervened. Pat is taking to the US something woven by a weaver in New Zealand; it's stupid not to weave a few things in merino. So I resisted the urge to rip out the SSVE warp and put my golden cotton (I already have a warp chain), and decided to rework the remainder of the undyed merino warp, but I'm going to make life a little easier for me. I'll rethread it in a little more enticing threading, and resley at 18 EPI, and use my trusty merino/possum/silk in the weft, just to eliminate a few elements of surprise.

If you think about it, as with most things weaving, it's so obvious it's just another "Duh!" moment, but if you never tried this, it's on me. If you come up with a winner and share it on your blog, do tell, or think of uploading it to Handweaving.net and tell us about that.