On May 2, I started my 10-week course on figure drawing.

A few years ago, if you suggested I take a figure drawing course, I would have laughed so loud you'd think me mad. But the last design workshop made me semi-fearless, and besides, I've known teacher Ronette Pickering, ex-weaver and ex-weaving teacher, for over a decade, and I thought it's high time I paid for all the neat fear-of-drawing-busting ideas she'd given me. So on Friday mornings, I've been going to class.

Ronette has a great reputation for enabling non-drawers to get cracking, and I was wondering how the dynamics of our relationship would change, but it hasn't changed at all. In fact, so many of the students are her friends, so there's a nice, small-party like atmosphere, and half of her past students read like who's who of Nelson artists.

The instructions are clear and we are shown lots of examples of the technique we're supposed to learn. This term the focus is on contours and tones, and I'm so glad I've started here because tone (value) has been one of the big fish bones stuck in my throat (now, that's a Japanese description!) when in comes to designing my weaving. I didn't know that this was part of a full year course, so on Day 1, I signed up for the next term, because mere 10 weeks could not make ma a hobby drawer, I thought.

My drawing are pretty bad, though. I still draw much of what I think I see and not what I do see but don't know I'm seeing. But there is that liberating feeling of doing something new without expectations, and I think I might be having more fun than those who have been drawing and have certain expectations. And like anything else, I find that a couple of hours of practice in between Friday mornings help in reducing the initial "Yikes" feel in the classroom.

The strangest thing I've learned is that we don't see the human body as a person, but as a form. The first couple of weeks I kept thinking about the criticism on rap music and the objectivization of women. In a figure drawing class, though, the models are not people, but different shapes of objects. And women are far more interesting because of the curves, and buxom women are undoubtedly the most beautiful. It was quite a strange thing to get my head around, but because we're looking at curves and shades, very quickly I got used to it and didn't feel too embarrassed, until one week we had a guy. 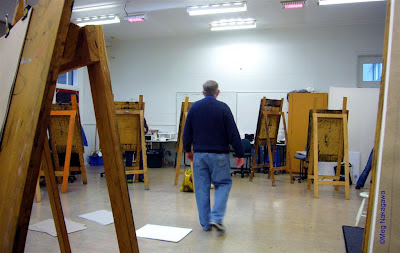 Last week in May, the model was a little late so we were standing around waiting for her. That's my new mate, Ron. It's a little harder for Ron because he's polite and doesn't want to stare at women models, so his drawings tend to be small. 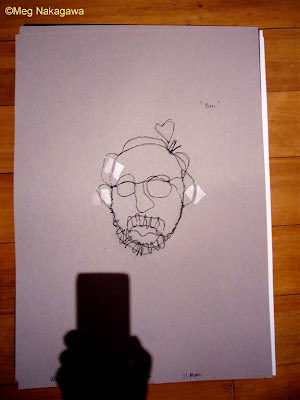 One week we made contours of faces using a thin piece of wire. Ronette gave me an extra length, so I did Ben's face that night while he was watching the TV. I had a little bit left, so I stuck a heart at the top of his head, because at that moment, he was mad at me for something or rather. My wire work went so much better than my drawing; I liked the more direct approach of bending the wire.
Posted by Meg at 6/18/2008 08:09:00 PM