Lotto jackpot tonight was NZ$30 Million, and we arrived at the supermarket at 7:07, seven minutes late to buy a ticket, which might have saved us $22.50 because Ben and I don't win things. Instead, I invested in a bottle of "50+ multivitamins"; that's folks aged 50+ from the illustration on the bottle, not 50+ varieties of vits and minerals. 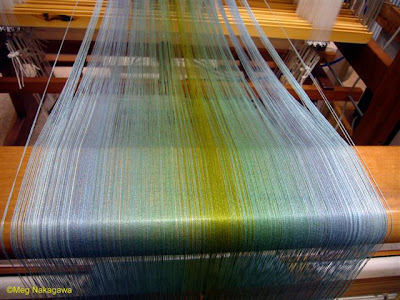 So the warp. The colors are sufficiently pretty; gradation and proportion regular, values controlled but sufficiently varied. Overall, blah. A couple of months ago I would have been thrilled with this warp, but this week I am not. I've thought of supplementary warps, but with what I have on hand, I haven't come up with anything inspiring yet.

I listened to Monteverdi while preparing the warp, and winding. I suspect madrigals and the Elizabethan flute & lute merriment are roughly of the same vintage; I like the transparency of the female voice in both, but I haven't listened to the latter in any depth. Still, I know madrigals occasionally contain unexpected (to the modern ear) notes, and when these are sung, I'm stopped in my track. I don't think I've had this experience with the Shakespearian interludes. I could be wrong; I don't know much about music. But I'm convinced this unexpected and yet still quite within-context surprise marks the difference between a pretty/blah warp and a warp one step closer to something amazing. I'd like to think Randy approves of this change in my taste/perspective.

Anyway, while threading, I switched to orca and whale cries, which became a little too desperate after half a day, so while sleying and sampling, I switched Enya, who has been the best match for this warp so far. 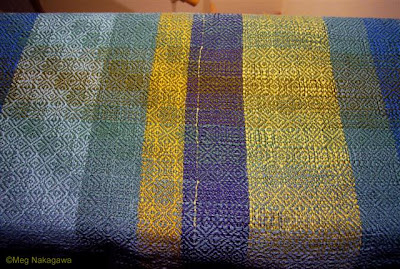 To combat the bland look, I tried strong wefts to overpower the warp colors, so the changes in the warp were mere suggestions rather than color changes. Nah, they looked dirty. Then I tried some of the colors in the warp, and two similar colors that didn't make into the final warp because they were either too saturated or different in value. Boring. The problem was, I kept thinking I've seen scarves like these before. In fact, I know I have.

Then it dawned on me that it's not only the warp that's bland, but point twill is also the problem; no matter how you dress it, point twill advancing in one way or another must have been done to death several thousand times over, and that's why regardless of what I try, they look so familiar, as if I'm imitating lots of someone else. It would take something truly spectacular to make this combination appear original, and now is not the time. 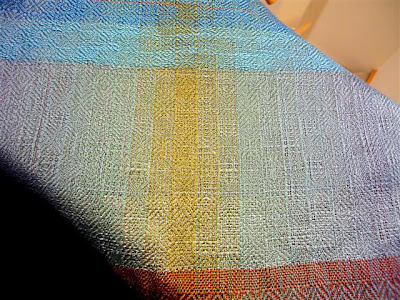 Just as a matter of habit, I sampled a couple of 60/2 wefts; I do this on almost all 20/2 cotton warps just to compare. It wove relatively quickly, and at 33EPI, it shows enough of the weave structure without suppressing the warp colors, but subduing slightly or uniting, depending on the weft color, and the washed cloth is very stable. I can live with this. I think I'll start with the top Wedgewood blue, (there are two in this piece, though it's hard to see the lower 1/3 is a pale white teal), and then study the sample piece under daylight and plan Scarves 2 and 3.

The edges look purple in the pic above, but it's closer to Wedgewood blue; the center is more browny yellow green. The warp pic at the top is pretty true on my monitor.

Gosh, even the pics look lackluster on days like these. I've been walking around the house imitating Alan Rickman's depressed robot. I don't even have the gumption to go over this post to tidy the tense; I'll just pretend that's a mechanism to convey my all-over-the-place-ness of the day. Night.
Posted by Meg at 10/19/2008 01:01:00 AM