Sometimes the Universe Conspires Against Me

Just because I'm paranoid doesn't mean the universe isn't conspiring against me, you know. I set aside two days to get over the dental surgery, and two weeks on, I'm functional only half a day at a time. Nancy said it takes longer to recover as one gets older; does it ever!

So I have a wall I need to install in exactly two weeks (to the hour!) and I'll finish dressing the loom today; I can get three off of this warp, but boy, I'd like to weave five if I can. But I'm so underwhelmed by this particular warp I'm like a five-year-old who moves deliberately slowly when asked to pick up his room. 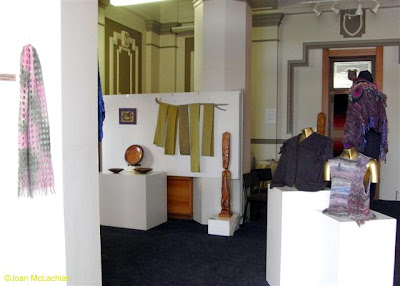 My babies from Westport should come home in time, so I'll have to use these as fillers. Thank you for the photo, Joan, (who is in the middle behind the blue skein looking to the left)!! I don't like recycling pieces from one exhibition to another; a couple of the Westport babies were at the Suter in August, so this is extreme rapid recycling, and I feel terribly ashamed about it, but at the rate I work, I may need to get used to it. As fillers, these don't fit the short promo blurb, (another hack job,) due yesterday, but I've got no time to worry!

"Bye Bye Blue Eyes"
This is a collection of cotton summer scarves, with a sea of Paul Newman's legendary blues, and a glance back at my life since a brief encounter with the star.

And then there's this other big thing. The New Zealand guild has a scholarship one can apply for on even number year, due 31 October. It covers tuition and travel to study something, and you can pretty much build your own program. I've been playing around with the idea since 2002, but never applied because I hadn't a sufficient body of work to enable me to focus and describe what I wanted to study. But reading Lynne's posts and reflecting on my danger-avoidance, back in June I decided to apply this year.

The details of the application process is sometimes like a state secret and I've only once been able to ascertain what needs to be included in the application package. However, I've had friendly pointers from past recipients so I thought I knew enough to give it a go.

This year, I started contacting powers-that-be about the application procedure on 23 September, and five persons later, still no official guff. Lorraine was able to tell me the official person was away so I might try another; Joan was able to give me past details but warmed me the requirements have changed recently and it's best to wait to hear the official version. Another official said she'd put something in the post, but nada as of today.

This kind of delays irritates the Japanese/American in me to no end, and further convinces me I'm in the wrong playground. It takes me weeks to create a convincing package for an application like this, (and by "like this" I mean, I've never, ever applied for art funding or scholarship before,) and I'm starting to feel, even if I got the guff in the mail today, I don't have enough time to put together a package and make sure it arrives at wherever in time. And it's been making me physically sick.

If it's my reputation as someone who can't finish things on time, fair enough, I concede, just say so. Or they're just playing with me because I'm hot-headed and like things done properly and timely, so they're having a good laugh, so be it. I may be "forgotten" because I'm not known to the powers-that-be, I don't work for any guild organization, (I only helped update the web site for five years), and don't win things at National or Area shows. So, not my turn, you know.

Chances are, they think two weeks is plenty of time, and because they're just passing the responsibility to the next person, they collectively don't know, and don't care enough to follow up, that I haven't got it yet. And nobody is going to own up to it. Sometimes posts form Nelson to the North Island take 10 days this side of 9/11, not that they care, meaning I would have liked to have posted the guff on Monday/Tuesday, but no way, no how, that's gonna to happen.