I threaded and sampled last night. Under artificial light, the sample was too, too cheerful, like a summer table cloth. I will use proportionately more of dark wefts in the pattern and especially in the tabby, if I have any, and I will widen the warp by two inches - a bit of toned-down reds on the orange side, and either more light blues and greens, or purples, on the other side, while trying not to make the bright yellow portion the dead center of the warp. I think I'll get more desirable results because a) whilst the colors are nice as they are, I had intended to create a much more subtle cloth, and b) for the complexity, for want of a better word, of the interaction of the blocks, I wanted a slightly bigger field to play with/in.

Today, we have sun and clear air, and I can see the interaction of the tabby colors, and I like the sample better than last night, and the late night decisions proved very valid.

The random threading, I like, but when I widen the warp, I would like some more in the block on Shaft 3 on the blue/green side; I hope you will be able to see what I mean when I'm finished with the piece.

I don't know which face is called summer and which is winter on this piece; it look more like Spring & Autumn, but I like better the side I don't see while I weave. The warps are more dominant, meaning not many shafts are lifted at any time, and I like the tiny squares making sparkle-like pixels. But I'll keep weaving the way I sampled, because as Uber Teacher Bonnie Inouye said, "Lift fewer shafts where you have the option."

Usually in Summer & Winter, one unit, or a pixel if you will, consists of four warps and four wefts, so initially I had planned to make a warp where colors changed every four ends. The narrowest bits in the above sample is one pixel wide. At 36EPI, a pixel would be 1/9 inch or 3mm wide, and I wanted smaller, so I disregarded the weave structure in this respect and mixed as I pleased. I started making the warp from the orange end, so you can see by the time I reached the purple part, I was all Right Brain. 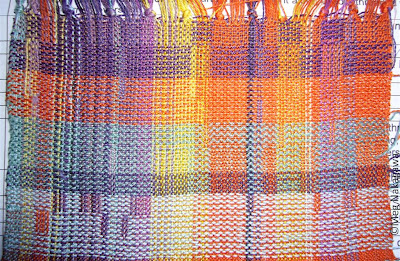 The side I see as I weave. In real life, the colors are more vibrant and intricate,
particularly in the left half. 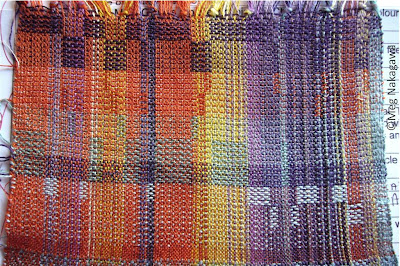 The side I don't see as I weave. I like the blocks of weft colors creating the sparkles;
these are one pixel wide by four tall, so I can make smaller bits of sparkle.
Again, the colors are more vibrant, but this is the best I could do. 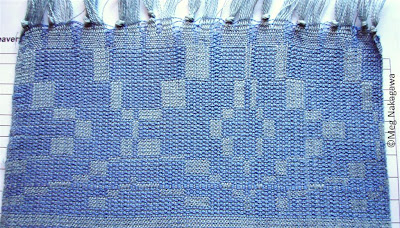 And because of the randomness in warp colors, I wondered if Birdseye is the right treadling, and wove the sample in Alternating treadling; Alternating is also easier to remember.

Warp colors, weft colors, threading, and treadling - it's as mind-boggling as the concept of 3D chess. This is turning even more fun that I had anticipated, if that was ever possible.
Posted by Meg at 5/30/2010 09:56:00 AM