This, That, and The Other Stuff 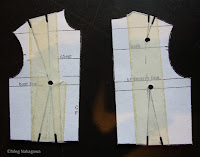 Thursday night's pattern making course was fantastic. There are 15 of us, including five young, beautiful, perky, confident high school students; I can't stop staring at them because they are so beautiful and fearless and I don't know if I ever felt that way; I certainly didn't look anything like them. The rest of us, middle-aged women bar one, have varying degrees of sewing experiences in different eras; I realized when we sewed have great bearing on our knowledge and vocabulary. We have one young chap interested in making theatrical costumes and it's nice to have someone trying to do something different.

Even though I struggle with some sewing/pattern vocabulary, (I remembered on Thursday that I learned to sew in Japan first, because I remember the Japanese words more quickly), Jill shows us everything, so I see what she means. It's a pity I can do only one thing at a time because Jill also has enormous knowledge about historical styles/eras and I would love to Google the images later. Alas, during the first session, I was too busy trying to keep up with the work, and even then, I cut parts I wasn't supposed to and had to borrow others' samples to tape the severed bodice ack together. Still, it brought back my happy days of high school geometry, because pattern making is 3D modeling.

I belatedly read Time Magazine's article on Facebook, tried to catch up with Slow Cloth discussions, and about curating: one about what motivates the curators to curate certain works, or works by certain artists, as opposed to others; the other about artists trying to subvert curators and putting their own work in the public eye, in real physical spaces. And my continuing discourse with Kath Bee about "making it" in our respective worlds. Out of all these, one thought kept coming back to me: the notion of self-made Internet celebrities.

Over the years, we've grown familiar with self-proclaimed performance artists/wannabes using YouTube to catch the eyes of those who could make them stars, some successful, many not, and a few being celebrated because they are so bad. But somewhere in my reading, I found writing on artists/makers promoting/touting themselves as something more than they are; that they equate the hits on their websites, blogs, or the number of folks who "like" their Facebook pages, with success or artistic merit; that some become self-appointed maestros just because they answer questions or become pseudo mentors to the less successful/public/whatever.

We place information online to suit our own needs/purposes; blathering/notes-to-self, friendship/discussion, collaboration, questions/tutorials, or promotion/advertising of our own and others' activities/works/businesses. But I think we're also smart enough to gravitate towards others who fulfill our needs/expectations. We try to be discernible consumers, don't 'we?

I'm not sure where I'm going with this, except I never associated any of us with such self-appointed celebrity, and was more than a little taken aback to read these. I'm not saying we are, but never associated blogs and such with celebrity, particularly in our art/craft/maker circle/s.

Friday drawing is getting worse for me. If contour/gesso/small weren't a killer combination already, Ronette has added layers yesterday; e.g. paper/gesso/chalk pastel/drawing, or paper/gesso/drawing/wash. I'm doing them, but they are getting too messy and "too much information" rather than subtle and suggestive. Though I add that some of my classmates are getting wonderful results. Just so not my thing. Enough said.

Having said that, Ronette making us try all kinds of things have begun to influence my weaving. I cannot stress enough how so-not-me it is to even think of designing on the loom just a short while ago. Most of my energy was and still is spent on numbers, drafts and sampling so I know as best as I can, (i.e. exactly) how a piece is going to look when it is finally washed, pressed and on a moving human body. I call it quality control. Now things are being left to chance. Ronette was pleased to hear that. But we'll see how the piece turns out.

Speaking of influences, I'd been closed to suggestions for so long, but now I'm more open, which cannot be a bad thing. But I wonder how I'm supposed to navigate through all the influences and still stick to my own aesthetics. I look at my tea cosy, and my next warp, and even though I like them both, I see clearly influences of where and when I live. Specifically they are from what I've seen in Nelson and around New Zealand in the last three or so years. Most art in vogue (in public and dealer galleries, magazines and newspapers, what people talk about), appears to me to be messy/irregular and multi-layered, (as opposed to simple, beautiful/pretty, orderly) and many are colorful, or in color combinations that clash in my mind.

It's one thing for me to view and appreciate them, even when I don't like them, but when it comes to making my own stuff, I often wonder if I am keeping tabs on how far I'm being influenced, and how far I wan to go.

I'm wondering what happened to my very simple, pared-down aesthetics; I still like those cloths, but I haven't made any in quite some time, nor do I have any of those in plan in the near future. I realize my taste or penchant can change, too, but I can't decide if it's a good thing or a bad thing. And I guess I won't know until I see what I've made what I am going to make.

I can't remember what triggered me, but once again, I was thinking of all the different pronouns in Japanese. And there are many, depending on the speaker, the intended listener, the absolute and relative social status of both, and the social context. And the speaker's background or penchant for the degree of honorifics. And I remembered self-deprecation is part of the Japanese language; heck, it's considered good manners in some circles. So I may overdo it, in two languages, but it's also in my DNA. That was a tiny baggage off my shoulder.