The Warp is Wound 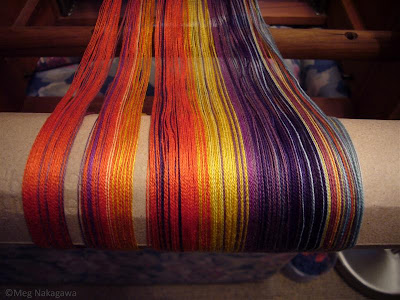 Nelson and most of New Zealand continues to have pretty dreary weather; our house has been dark most of the day but I had to get started, so I switched on all lights on around the hallway and stairs, and made a warp under six halogen bulbs.

The problem I have with selecting colors under artificial lights is the colors appear less saturated than they actually are, so I end up making noisy garish warps. In addition, the main orange I have is screamingly loud, not the soft, elegant orange found in the photo. I reduced the proportion of the orange, and increased the yellows and purples. I also decided not to include white nor black in the warp, as the sharp contrast added to the already saturated warp colors would render it ... unbearable. Still, I didn't want the pale blues and greens to predominate because I didn't want a cool, sad warp.

One of the very pale violets appear so susceptible to theory of simultaneous contrast: it appears almost brown at the right end of the warp, but quite purple at the left. If I believe the weather forecast, it's going to be a few more days before I can see the warp under natural light, and by then, I'll probably well on my way in weaving the piece.

My right brain continues to predominate the process. I looked for better light and height around the house, and the loom was precariously perched on a soft cloth couch as I wound the warp. Then, without thinking, I took out the cross sticks and tied one to the front of the loom! I don't have a threading plan, but I know the rules of Summer & Winter so I'm threading by ear.
Posted by Meg at 5/29/2010 05:03:00 PM

Email ThisBlogThis!Share to TwitterShare to FacebookShare to Pinterest
Labels: Pics to Picks 2010