And Then it was Saturday

The day started great. I still felt buoyant from Friday, feeling I'm back to pre-depression state, pretty much where I was in Nov/Dec sans the endless spring/summer cold, as if my 2009 finally started. Simultaneously wondering if this is going to be short-lived. Now that I know more about my depression, I fear a dark phase could always be around the corner, at the same time I will not succumb to self-fulfilled prophecy; I am too busy for that.

Read Hamish Keith book in bed till late morning. It's a memoir, not a chronological autobiography, so I got confused from time to time. Plus though I may have read about the historical/cultural incidents cited, I haven't lived through them, so at times it reads like a cracking good story, but the economy of his writing more than makes up for it. I agree with most everything he believes, except he had information, access and rationale to back his beliefs; I go by gut feeling/emotion and appreciate I can now cite him and his reasoning to back my beliefs.

I've never read or heard such genuine passion for New Zealand by a New Zealander. He loves being a Kiwi, and has not-oft-heard views on the Pakeha (European), Maori (indigenous), Polynesian/Pacific New Zealands within. He's inclusive and doesn't cringe, but commands respect on behalf of his beloved country. Truly refreshing. Whereas most of his peers went overseas to better themselves in their respective fields, Keith never felt the need to join the exodos.

Made me guilty for looking to overseas opportunities. Because there is a vibrant textile art scene in New Zealand. I could say I don't get them and they don't get me, but the real reason possibly relates to identity. That I don't know where I belong.

One thing worried me; I have seldom been able to look at artwork without words, explanations, biographical knowledge, and reading his complaints about too many words obstructing artwork, I was not sure how to remedy my case. I only know I see artwork through someone else's interpretation; it seems this has almost always been the case.

Reluctantly went to the Textile Awards show, resolved to hate everything beforehand. The selection was either flexible or unfocused. Absolutely loathed some, but liked surprisingly many, which troubled me. I liked harmonious, gentle pieces, which were lovely pieces made in traditional methods and material. But that's the trouble. The Awards blurb said it intended to "showcase the use of fibre and textiles in a challenging and more conceptual way from their more general usage..." Most of what I liked didn't challenge and didn't have much concepts I could see; they were pretty straight forward, (though there were no woven scarf), and a few using a bit of fancy material but otherwise the same-old-same-old. There were a few challenging and conceptual work, but these I hated, and that didn't help.

If I had written this blurb and were among the selectors, I would not have chosen what I was hoping to submit, to be true to what I preached. A big load off my shoulder,then, because I didn't know what to do with that warp still sittign on top of my loom, but now I shall weave nice scarves and worry about textile/fiber art later.

Then we went to the Suter's Maui Dynasty exhibition which we had a glimpse of Thursday night during the DNA lecture. I thought it was about the Maori identity; it's about everybody who call this country theirs and make art. Again, guilt for looking outward; justification because Asians are still excluded from the national identity discourse, excpet for a select few athletes; we are often prefaced "(insert-ethnic-origin) New Zealander" even if one is a descendant of five generations of Chinese immigrants; this is not restricted to Asians, but like one Maori woman said in a doco a decade ago, "At least we're better off than Asians; everybody hates them."

I love living and making art in New Zealand; I love a lot of what is made here; I don't like of what's made anywhere. And by no means the entire nation of New Zealand hates every single of its member of Asian extraction. But I am sensitive to the matter, particularly because I feel I'm hard to box in conveniently; I loath being called a Japanese weaver, because I learned the craft here, and I want to include the American influence because that will always remain a big part of me. So when asked where I'm from, I often say, "Tahunanui", my suburb. Either that, or Planet Earth. 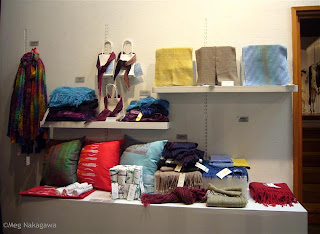 Took pictures of my stuff displayed at the Suter shop to set me back to where the two axis meet. I hadn't realized they have a good representation of the styles I've worked on since late 2006. These are what I have done so far; this is my creative past.

Came home to shoot Pat my scathing list of Hated/Loathed/Loved list from the Textile Awards show, and another asking Ronette to discuss textile/fiber art next time we met outside class; I take it in her reply Ronette meant: "yeah, good question."

Comedy at the Indy in the evening. Met up with Kath Been to listen to a Kiwi Jewish, (she coined a nice word for that but I can't remember), Deb Filler who's lived in the US and Canada tell lots of Jewish and old people jokes; refreshingly politically-unworried. Should have gone to bed happy but couldn't sleep, so I read more of Hamish Keith.

The kitchen shelves need redoing, and I must discuss it with the project manager on Monday. My life-saving GP resigned from medicine in December, and now my psychologist is leaving Nelson. Plenty to worry about. Not sure if textile/fiber art or yet another identity examination brought these up. Funny how the mind works. Must go see both exhibitions again.
Posted by Meg at 2/22/2009 04:20:00 PM