The Builders yesterday told me they'd be here between 7.30 and 8. So I got up at little after 6, Ben got up shortly after, and we both got on the computer, mindful we needed to get our morning routine out of the way before 7.30.

By 7, I was tidying the kitchen. At 7.15, I reminded Ben to move the car to the top of the driveway so the builders' trucks won't be in his way when he goes to work much later; I got his usual uncommitted grunt as a reply.

At 7.30, Ben came into the kitchen in his PJs and started making his breakfast. I glared at him, so he went downstairs to have a shower first. I still hounded him about priorities, and he looked exasperated and jumped into the shower, then came up to have his breakfast, moving very slowly.

I asked sarcastically if he had moved his car already, to which he mumbled, "Yes, when you told me to."

So the original title to this post was to be "Is it Me, or Is it Him?". Big humble pie, Ben. (Though you could have told me!) 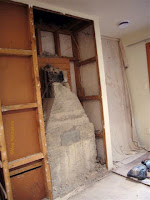 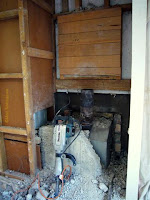 I can't seem to make myself go downstairs today, so I might as well work on the website.