Today was not a productive day; I only added three pieces to my website's gallery. I'm covering significant-to-me pieces chronologically, so I had to recall about work I did in July-October 2005, which is like light-weaving-years ago.

On the home front, I had three builders, one plumber (coming and going all day), three electricians (morning and afternoon) and three ventilation guy (early and mid-afternoon) come to the house, and those are just the ones I met; if anyone came and spoke to the builders directly, I may not have noticed. Though I assure you this is not a big house and the kitchen is four medium steps away from the office.

I also had to ring the wood burner guy twice, the vent guys once, and my regular chimney sweep, an amazing philosopher, rang to say it's that time of the year and would I like my chimney cleaned, and I explained what's what so he'll come have a look when this is all done.

Young Ryan the builder had to level the concrete in the living room, raising smoke-like fine dust. Not much we could do to contain it, so I grinned and bore it. And vacuumed after everybody left, changing the bag three times. And that's just this half I can access now.

It was interesting to watch project manager Mike check things and instruct Ryan; Ryan is hardly an apprentice, he's just younger than the others, but because I've only ever been to "academic" schools, I felt privileged to witness how younger tradesmen get more training on the job. Heartwarming stuff.

Oh, I got talking to Ryan yesterday and ended up showing him my four-shaft Jack and 16-Shaft Big Mac, and explain to him how a computer-controlled loom works. Today, Shane the Man asked to see it. I'm happy to spread the word anyway I can, to anyone who'd listen. I was flattered Ryan talked about it, and Shane was interested!

I'll be sure to take pics of these two, plus Gentle Nigel, my new regular plumber, when they're not covered in fine concrete dust. (Actually, that's Shane wondering what on earth I'm doing.) Fine men, all; salt of the earth kind. 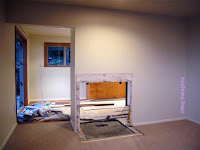 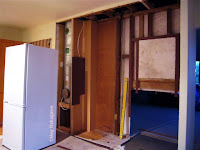 Just now.
PS. A while back a columnist kept writing about her house renovations (big job!) in her weekly column in my favorite magazine. I got so bored after Week Two, I stopped reading her column altogether; that she's so far to the Right and I'm towards the Left didn't help either. So I'm sorry I'm boring you with the house stuff, but I'm stuck here and this is the happening thing right now. Shane reckons by the end of next week most everything will be finished. I think he said so.

PPS. You know how, if you have a potty mouth, you can be described as "swearing like a construction worker"? Is that the right phrase? Well, around these guys, I have to watch my mouth because they don't. Swear, that is. I didn't like being called "sweetheart" by one of the other guys, and I reacted the way I normally do, and I managed to amuse my construction guys.
Posted by Meg at 2/12/2009 07:52:00 PM