What Can I Write at Three in the Morning...

So what can I post at three in the morning? Well, these are two scarves I wove in July and December from last June's SSVE warp. After I wove the small white scarf, I evacuated the warp to weave two warps of cottons for my Santa Fe effort. I wanted to experiment how the drafts translated in wool, so I must have tied it onto the gold cotton warp. This warp is merino with scales, the weft is merino/mohair mix, and I found I had to pack in the weft to bring out the mohair sheen and to make the resulting cloth not netty, and because it's packed, the draft came out flat. I'm not the best judge of the hand because I'm allergic to mohair, (and that's probably why I used this weft for the first time since 2005) but the cloth felt stiff. I didn't like the way it looked off the loom, so I hid it under the couch.

When Marlborough Weavers met with the Richmond Weavers and we did the massive show-and-tell, I brought, unfinished, this to show the difference in the appearance of the same draft, and said I didn't think it worked. June McKenzie from Marlborough and Georgina from Richmond told me to finish it anyway, "because someone will like it." And I finally listened to the wisdom of experience. Still lots to experiment if I want to use this type of draft with wool; if I were to retry, I'd use a merino weft because the draft would look more even... What's that called when the ppi is roughly the same as epi? 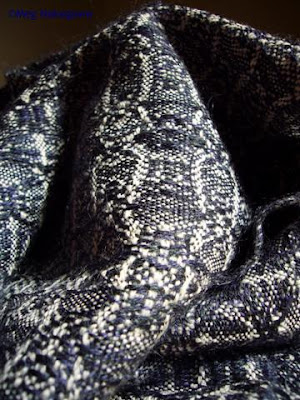 I must have evacuated the warp again, because I tied it on to the end of the Festive Towel warp in November/December, and wove it in this draft. The weft is a commercially dyed merino without scales. This is a nice, compact scarf, lovely hand but tighter finish than usual. As it was the warp end, it's a tad shorter than what I would have liked. 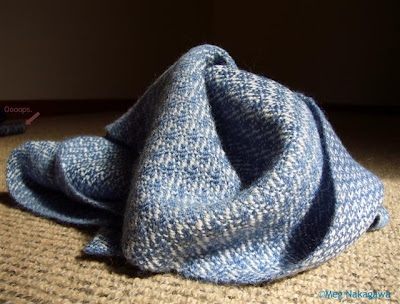