The Last Big Whine About the Textile Awards

** This is an overlong post and I'm going to whine about new Textile Awards one last time. You are more than welcome to skip it. **

Yesterday, Friday 13th, I escaped the construction site that is my house. I went to the figure drawing class, which was nice, but the model fidgeted and fell asleep and I found her attitude unprofessional. On the other hand, I'm getting used to doing what I want. Everybody else stuck with white A3 (twice the size of your average notebook) paper, but when Ronette said we could use the easel, I went on to black and gray A1s (four times A3) using brown pastel and white conté. My drawing is nothing to write home about, but I felt good. Then I had lunch with Ben at Delicious. 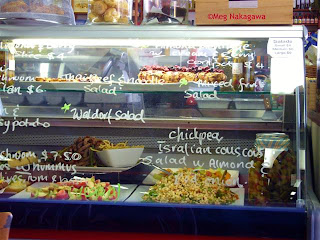 Then ran into Sue Bateup. She had a piece accepted in the Awards show; there were 150+ entrants, and they culled it to 32 or 38; and did I put something in? So I explained the whole mother-in-law-and-trip-to-Japan thing. She asked if I was planning to go to the opening, and I said, probably not. She said a bunch of Nelson's textile people would be there and it'd be nice. I said being asked if I had put something forward and my having to explain why I couldn't was why I didn't want to go. And the missed opportunity thing. She said she understood.

Then I saw "Doubt" with Meryl Streep, and found it dissatisfying; I thought it was more or less a film in which two great actors overacted playing underdeveloped characters.

Then I went to three bookstores but didn't buy anything. Then I found an Australian magazine called Artlink, (Contemporary Art Quarterly, vol 28, no 4), featuring articles about curating, curators as artists and artists as curators, shows outside the "box", and a bunch of articles about exhibitions all over Asia. I bought that. The way I see it, having work selected for any show is a hit-or-miss thing; it's like finding your mate; it's about whether you click or you don't, or rather, whether they click with your work or not. But I wanted to know what they said.

We came home around 6.30. I checked my email and found the Textile Symposium newsletter. I had given up on going this year because of our finances, but I felt so sorry for myself I changed my mind and booked my flight and accommodation. I'm staying at a place that costs about half of what I'd normally pay, but it felt akin to a teenage act of defiance, as if I was daring Ben to stop me. I also know the Hawkes Bay Museum runs seriously worthwhile conferences, and I genuinely wanted to be there.

After that, I was so tired I ate a popsicle and not-nice chocolate chip cookies and drank milk while we watched a couple of comedy reruns and American Idle Season 8 Hollywood Cull Part 1, and then I went to bed at 9.30. I'd be getting about five hours' sleep every night this week.

Saturday, today, I woke up around 9 after a strange having a strange dream. If I'd gotten up then, I could have told you exactly what it was, but I only have vague recollection now.

I kept picking up Hamish Keith's "Native Wit", (a cracking good read), and kept falling back asleep, trying to remember/forget the dream. I drifted between this world and wherever until 1 in the afternoon.

Oh, the dream. It had something to do with a missed opportunity, that somehow, within or beyond my control, I had to forgo a cracking opportunity, and folk just keeping asking me why, and all I could do was to smile meekly. I had my back against a tall, solid gallery wall, and felt crushed by good intentions. It ended with me sticking my arm far into our PO box, and pushing open the door at the other side, which it turned out to be someone else's PO box and our two boxes were connected! She was throughly surprised!

I thought I was over the Awards thing. I honestly did. I realize I sound so self-absorbed, and am so unconsciously or subconsciously, but I find this utterly unattractive. Still, I'm not going to the opening tonight; I feel a sharp pain in my stomach thinking abut it; I'm going to this theater do instead, being easy on myself. I have been searching for other opportunities, and I've altered my plans accordingly. But the warp is still sitting on top of the big loom, just the way I left it in early January, and I get emotional thinking about working on it.

I think I know Ben enough to know he does appreciate my having gone home with him, and I think he knows how disappointed I was to give up the Awards. And though it may be blatantly obvious to you and me that I needed to go under the circumstances, there is a background to my grudge, but I won't go into it just now.

In the first instance, the onus is on me to get over myself and stop feeling sorry. I know this. But it would help if Ben acknowledged my sacrifice, perhaps verbally. In this respect, I feel myself to be a time bomb. A simple "Thanks" would go a long way.