Friday was a Fabulous Day

A lot to tell you; my mind keeps jumping from a content, wordless state, to various "me"s and Hamish Keith shouting and tossing great ideas like used tissue paper, to bright colors dancing and enticing me to new places. To my surprise I am not reluctant about the last proposition.

I'll explain the only way I know how, then; chronologically. Sorry for being boring.

Friday started with the figure drawing class. I'm not a fan of my drawing, but I like how I concentrate immediately and automatically, and I'm feeling very OK about not necessarily following instructions. Said the same to Ronette the tutor and the reply was "Everybody is doing what they want anyway!". Repeated to Pat when asked about the drawing course; I'm still trying to seduce her to join.

Then I made my way to Indy, Independent Theatre and Arts Centre, to pick up tickets. This is the only theater in Nelson with a regular season, opened in October of 2007, by the sheer willpower of one Grae Burton and his friends and family. Bless them!! While conducting the business Grae mentioned he saw my scarves at the Red, (her mum is an experienced knitter), and asked if I wanted my work shown at the Indy. It transpires there are several options, so we will meet and discuss in March.

Feel moral pull to stock the Refinery shop first, but support both burgeoning institutions and want to commit to both. In fact, had a bright idea suddenly how to hang my scarves at the Refinery after a year-plus of clumsy ideas. Weaving idea sprouted, adoptable to both Indy and Refinery. Rushed to yarn shop around the color and sought funky yarns and grabbed six balls. I've moved on from just thinking about Lynne Bruning's suggestions. (And all this time I spelled her family name with two n's; sorry, Lynne. But she is too busy to notice this weekend.) 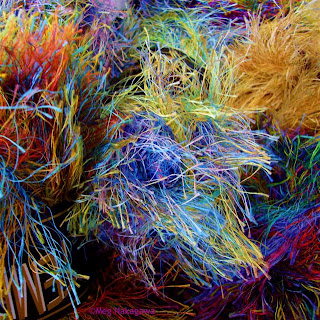 Picture this; leggy teenage girls with great skin, (of whom we saw aplenty in Indy's last Shakespeare production, both on stage and in the audience), sauntering down Church Street in little old Nelson, throwing Fitzgerald-esque boa scarves, wanting to be seen, admired, and desired. Well, teenage girls aren't that simple nowadays, perhaps, but that's my starting point; of course by the time these balls go through my interpretation, the scarves will mutate into pieces suitable for middle-age theater-goers. Just as well; they'll be more in their price range, I'd imagine.

I met with Pat Spitz, (the exquisite tapestry weaver - I must show you her work some time - and the one who brought my scarves to Santa Fe). She went to the opening of the Textile Award show, but couldn't see the works in detail, as you do/don't at openings. Discussed our tastes (which turned out to be similar) and thoughts on textile/fiber arts. I showed her my possible new direction, and she applauded my courage but expressed concerns I was going to do only "flashy" in future. No worries, I'll always be the muted, "pretty" cloth lover.

Went back to the yarn shop to get a more balls; a grand total of NZ$100 of unexpected spending. Still needing more visual stimuli, I went to where I always go when I seek new ideas; the architecture section of Page and Blackmore Bookseller, and met this book. It costs about the same as what I earn working two half-days at the Red, but I went ahead and put $10 down. I never knew they were called architectural "follies", but always been interested in them since childhood, and collected photographs for decades. Also got the Nelson Mail covering the Textile Awards show, and decided I was going to be throughly anti- and ho-hum about it. Staff Stella asked about my plans for the year, and I gave a non-committal mumble which she mistook to be my opinion on New Zealand textile scene; "and overseas opportunities?" she asked, as if I'd always considered those as well.

Went home in a terribly good mood; didn't mind the 45-minute wait at the Indian takeaway. I had plans, visions, hope. I was getting over this past January, and self-pity at long last. Fell asleep reading the Hamish Keith book.
Posted by Meg at 2/22/2009 04:00:00 PM